a history of transparency 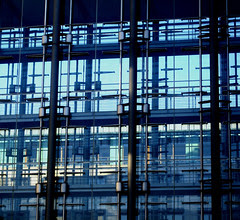 transparency is just a concept
© DREASAN

Two projects in IBM have recently decloaked, both which I've had the pleasure of working on: Jazz and Project Zero. Both projects have come under some attack by folks as being "not open source". For instance, see Mark Pilgrim's typically humorous response to Project Zero.

I'm not interested in talking about that specific aspect of the projects. I'm an open source commie from way back, but the fact of the matter is that IBM contributes a lot of open source to various communities, and at the same time produces commercial, proprietary software.

From 1985 till about 1995 I worked on projects internal to IBM, and didn't really have a need to deal with customer feedback on the products I was working on, because they were internal to IBM. We did have a 'newsgroup'-like system called "IBMPC Conferencing" that was a fantastic resource for IBMers. Not a whole lot of people used it (relatively), which was unfortunate, but also kept the wheat/chaff percentage quite high. It did serve as a way to communicate with our internal customers though.

The IBMPC conferencing system expanded sometime in the early 1990's to allow customers access to a restricted set of 'newsgroups' called CFORUMs. This was quite convenient for IBM developers, since it used the same news system we already knew how to use, and customers also had access to it somehow. Sometime later, IBM created a real NNTP server named news.software.ibm.com, which served the same purpose as CFORUMs, but used the more 'standard' NNTP protocol.

By this time, I was working on VisualAge Smalltalk, and we created at least one newsgroup for it on the NNTP server. For other projects I was involved with later, we also created newsgroups on the server.

So, we've provided some kind of newsgroup-y access to product groups for a while. However, we were limited in what we could actually discuss on the newsgroups. While we would frequently accept bug reports from users posted to the newsgroups, we couldn't really provide bug tracking numbers, since there was no way for users to access our bug tracking systems. We did it anyway, to at least give our users a shorter handle by which to reference the bugs. For new feature requests, or requests for when the next release would be made available, you'd typically see a response of "We cannot provide information regarding future versions of the product". Which was insanely frustrating for us developers. But we bit our tongues and pasted that response into posts, a lot.

So now, roll forward to the mid-late 2000's, with Jazz and Project Zero. We have 'newsgroup'-y access like we have had for a while. But we also have access to the bug tracking systems. And source code management systems. And a general notion of talking more openly about future release content and dates (I hope!)

I'm a firm believer in this sort of transparency being a benefit to everyone, and I'm looking forward to this becoming the rule rather than the exception for more IBM products.

Posted by Patrick Mueller at 11:18 AM