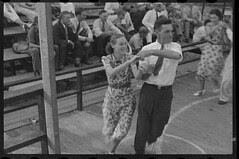 theRab tweets: "i'm afraid to google 'ruby hoedown' so i'll just patiently wait for your blog post". Here you go. BTW, no need to be afraid of Google (at the moment).

Friday was just a half day afternoon session, though there was a testing workshop in the morning that I didn't attend. A bit over a hundred attendees, I'd guess, many from out of town. Usual list of sponsors, with one surprise: Microsoft; though obviously that's not a complete surprise.

I recognized a lot of folks there from last week's barcamp, and some from the erlounge meet-up. Some "Old Dudes Who Know Smalltalk" were present, including my evil twin, Rick Denatale, and someone I hadn't talked to in ages, Ken Auer.

Posted by Patrick Mueller at 1:32 AM No comments: 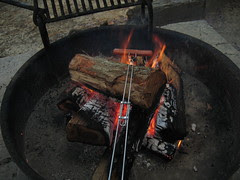 On Saturday I attended BarCampRDU 2007, and here's a quick round-up.

First, thanks to the organizers and sponsors; it was fun geeky way to spend a Saturday, and the amenities were fantastic, especially considering the price of admission. Especially enjoyed the catered coffee bar and lunch from Neomonde.

Here's a list of some of the sessions that were run:

Some of the sessions I went to:

Camping at 10
Very cool; I really need to dive deeper into Ruby. Completely random factoid: of the 15 laptops in the room for this session, 12 were Macs.

FaceBook application development
Quite illuminating. I had thought all those 'user generated' FaceBook apps were actually hosted by/on FaceBook, but they aren't. Which makes me even more leery of what those applications are doing with the data we're giving them. hmmm

Open Services
Whereas Open Source / Free Software has defined freedoms surrounding source code, the next battleground on the freedom front are the services we use on the web. What does it mean for something to be an "Open Service"? Not sure why Luis thought he "trivialized the discussion"; absolutely not. Lots of really interesting things to think about here. Especially as we find our data getting mashed up and otherwise reused in ways we never expected.

Rather than take my laptop into the unconference, I decided to try living with just my Nintendo DS-Lite with the Opera browser. I've surfed a bit here and there with it, but not for an entire day. While it's quite capable at handling degraded 'mobile' sites, available for Google Reader, GMail, and Twitter, for instance, it's rather painful for websites designed for desktops. Most folks probably won't tolerate the slow, small device, especially compared to the iPhone. But having worked on embedded devices for years, I can easily overlook the limitations. It's a lot cheaper than the iPhone also.

All in all, worked out pretty good; checked my mail, checked twitter, checked blogs; posted a few twitters. A bit painful, pecking out messages on a tiny touch screen with a stylus, but worth it to not have to lug my MacBook around in a backpack. Just had to lug around my man purse.

Lastly, one thing I already knew, but had reinforced, was that all the kewl kids wear bright yellow / orange shirts from Threadless.