I don't travel much, anymore, so I've gotten out of practice. Here are some things to remember to bring and/or buy.

php|architect's Pro::PHP Podcast. It's 1/2 interviews and half news. Good stuff, if you're trying to track what's going on in the PHP world. Think I'm all caught up at this point.

RedMonk Radio from the boys at RedMonk. No, I don't know why they have an eyeless, souless, creepily smiling zombie on their home page. What is it with England and zombies? Shaun of the Dead? 28 days later? Disclaimer: IBM is a Redmonk client. :-) Anyway, always a good listen. Think I'm all caught up at this point.

developerWorks podcasts. Grabbed these at the last minute before I left on my trip. I downloaded interviews with folks I've worked / chatted with over the years, including John Kellerman (previous boss, fellow BoilerMaker - go Boilers!), Carol Jones, Rod Smith, Bobby Woolf. Note these are Old Dudes (and Dudettes) Who Know Smalltalk (I think Carol and Rod at least dabbled in ST anyway). It was fun to listen to old friends, but I didn't really learn anything from it; I hear it at work all the time anyway. I suspect it will be good for non-IBMers to listen to.

I will probably also need a new iPod soon; my old 3G 15G is really getting old and crusty.

Posted by Patrick Mueller at 4:45 PM No comments:

What my son wasted his time with today

And who can blame him, it's a blast! Maybe it's the simplicity of it. I'll rationalize that he'll empirically learn some physics ...

Posted by Patrick Mueller at 4:40 PM No comments: 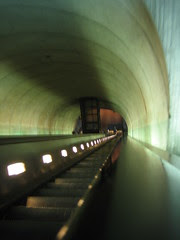 Just got back from the City of Ginormous Escalators, aka Washington, DC. I was there for The 2006 DC PHP Conference. To the right is picture of a typical escalator to the Metro subway system.

The conference was pretty small; about 80 people; in two small-ish conference rooms in the hotel. But everyone was great. Conferences are all about the people anyway. With the small crowd, it meant being able to spend time with a significant percentage of the people there. It was a mix of PHP thought leaders, everyday PHP programmers, and, since it was based in DC, a lot of folks focused on the unique industry that is DC - government.

Writing Maintainable Code with PHP by Laura Thomson of OmniTI. Pretty much standard fare for an old programmer like me, but good info for new folk. And it never hurts to hear this stuff again. Recommended the PEAR coding standards; arghhh ... spaces instead of tabs ...

PHP Security Testing by Chris Shiflett of OmniTI. This was good; I don't think I've ever really thought about using a test framework specifically for security testing, but it obviously makes a lot of sense. I mean, we always test for cases we know will fail, or are likely to cause problems, as well as for cases we know will succeed. But I've never specifically thought about testing for security. Mentioned Selenium, which I've heard of but know nothing about. Note to self, check it out. Chris also gave a talk on general security vulnerabilities and attacks against them, which I couldn't attend.

ext/soap with eBay Web Services by Adam Trachtenberg of eBay. Fascinating. Numbers: 59% of eBay listings are created from their WS APIs rather than through the web ui. One million WS requests a day. 100K sellers using 3rd party tools that use the WS. eBay wsdl file is 3Mb (the huge wsdl contains human-consumable documentation on the APIs (like JavaDoc)). New version of the APIs roll out every week, and each lasts a year or so, and there are separate APIs for different parts of the world; meaning hundreds of versions of the API are available simultaneously (but they don't change all that much). Showed how to build https://www.dudewheresmyusedcar.com/. This was the first positive thing I've heard w/r/t WS-* in a long time. That's great. It's good to see people using this stuff in practical ways. I'm still not convinced it's the best answer though. Side note: Adam asked early on how many people have sold stuff on eBay, and I was embarassed to not be able to raise my hand. So I found something to sell: A pre-owned Metro FareCard.

High Volume PHP & MySQL Scaling Techniques by Eli White of digg. Went over typical clustering techniques, most of which I'm basically familiar with, although memcached, I'm not. Talked about database shards, a term I've not heard of before, but the concept I'm very familiar with. None the less, I can't help associating the term "shard" with a scene with Philip Seymour Hoffman from Along Came Polly; discretion prevents me from explaining more. Eli also presented Top PHP Feautures You Didn't Know Existed, but I was sitting in the virtual parking lot that is I-95 South in Northern Virginia on a Friday afternoon instead of attending. Like my eBay n00by-ness, I don't read digg much, so I just added it to my blogroll. Gotta keep up with the kewl kids!

Rasmus Lerdorf did two presentations in one; one was "Yes, PHP is ugly, get over it. Go solve some problems." The other was the Getting Rich with PHP 5. The first was definitely a pep-rally speech, but you know, I need one of those every now and again with PHP. The second one talked about valgrind/callgrind. Need to look into these.

Enabling Digital Identity by David Recordon of Versign. This was great; I knew almost nothing about OpenID before, and now I know ... something. Anything to get the nastiness of maintaining an authentication system yourself is a big win, as far as I'm concerned. Went ahead and created an account at https://pip.verisignlabs.com/, now I just need to figure out what to do with it. Also need to look further into Yahoo's Browser-Based Authentication thing. 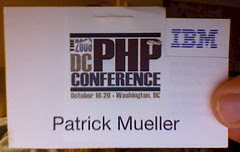 Posted by Patrick Mueller at 4:16 PM No comments: