I've been using Bloglines for ... a while. I wonder how long? What did I use before? hmmm ... Anyhoo, one of those things that shakes your belief in a product happened to me last night, as I was adding a feed to my bloglines collection.

All of my feeds disappeared.

For a few hours, at least. This morning, everything was back the way it used to be, including that new feed that I had tried to add.

Important Lesson: make a back up of your feed list every now and again. This would typically be in OPML, which everyone seems to be able to export and then import. There are all sorts of ways you can lose your feed list, including some suprise ones.

My last copy was just over a month old, which was good enough for jazz. 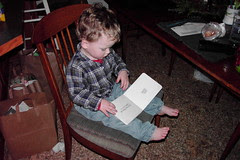 While it was down, I decided to poke around and see what else was available. I had recently loaded my bloglines opml into Google Reader to give it a try, so I continued to give it a try. I rather like it. And it's small fonts. (I think I'm quite fortunate that, of all the problems that people start accumulating when they get old, I don't have problems with my vision). I think I can get used to it.

Also took a quick tour of feedlounge, because I've heard good things about it. $5 / month. I can deal with that, I think. I just played a little, I should do another 24 tour with it I guess.

I used to use Shrook back in the day, and when I found it on VersionTracker, the reviews didn't seem so great, so I didn't bother.

Listening to a slightly old MacBreak Weekly today, I heard Leo put a good word in for NetNewsWire, which I guess got bought by NewsGator sometime in the recent past. I should try that also. I think the same show mentioned both Daring Fireball and The Macalope which I should try reading (again, for Daring Fireball).

w/r/t the online vs. desktop dilemma, I think I'm still firmly in the online camp (bloglines, google reader, feedlounge). Because there are still occaisons where I'm on some rando computer and want to check da feeds.

There are a number of downsides to Google Reader compared to Bloglines:

Posted by Patrick Mueller at 10:39 PM No comments:

A colleague of mine, Andy Wharmby, sent me a link the other day.

Terribly exciting, no? Well, maybe not for you. But a bunch of us in IBM were quite happy.

Andy's got a cool job right now, which is: learn the innards of the php runtime. As IBM is getting more serious about PHP, we figured we had to get our fingers into the fun stuff, especially since we have a little experience with virtual machines and runtimes like this. Andy, for instance, has been working on the Java VM for a while.

Even so, getting a bug report like this filed doesn't seem like such a big deal; it's open source baby! My mom could submit bugs reports. But my mom doesn't work at IBM. We're fairly strict about work-related open source activities, after some of the events that have transpired over the last few years; we need not speak of that. Strict means getting approvals, etc. And to be precise, it's not the filing of bugs that anyone in IBM cares about, but shipping code, and by implication, submitting proposed fixes. Which Andy did. It's not an impossible chore to get this stuff done, but it takes some time to get everything lined up.

BTW, Andy's fix was accepted with a small tweak from the Marcus and some eagle-eyed code checking from Pierre ... good to see the community keeping us honest.

Posted by Patrick Mueller at 9:00 AM No comments: