Someone asked me today what I thought value proposition was behind CouchDb. Here goes.

Let's noodle on that last point a bit more; it's a server AND a database. Now, whenever I see "server", I immediately ask the question - can I write a web app for that thing? Or is it just serving read-only documents up? Check the REST APIs. Read/write web, folks. But, there are some caveats. JSON objects are trivial to store in the database behind a simple URI, but anything else (something that's not JSON), needs to be stored as an 'attachment' for some JSON object. The raw data of the attachment is available at a particular fugly-ish URI, of the form:

What does all this mean? Well, it means you could, say, serve up HTML out of your CouchDb database, that could be rendered in a browser. Which might include some JavaScript (inline, or referenced as another 'attachment'), which could then read/write objects in the database. A self-contained app inside an app server. Oh yeah, the data for the app is stored there to.

That's the theory anyway. I intend to practice this weekend.

BTW, for any Mac folk that want to install CouchDb to play, I recommend installing it from MacPorts via:

The first command installs the icu package, then erlang, then couchdb. The last two commands launch CouchDb, and arrange to have it started at every boot. From memory, I think I had to do these after the port install, but I could be wrong; perhaps the port install did them for you. In any case, there's no harm in running those commands again.

As a quick check to make sure CouchDb is running, either open your browser on the following url: http://localhost:5984/_utils/index.html, or run the command, which should provide the short JSON object below: 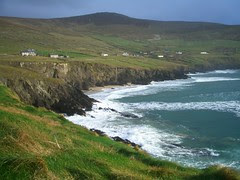 We're heading to Ireland for a week+ vacation in March. Any must-do ideas? I mean besides testing Jon Udell's theory on Guinness. Actually, I've been to Dublin before, I can vouch for his theory already.

Here's the general plan. Fly into Shannon. Leave from Dublin. Presumably travel along the coast (southern). Though there is already some interest in going north from Shannon for the first day or two.

This particular trip we're making with two of our friends from college days, and without the kids. We've travelled with these particular friends several times over the decades. They travel more than we do, and have volunteered to get an itinerary together, along with handling reservations at B+B's and what-not, as they have for other trips we've made with them. Which is great for me. Well, easy. They've done an outstanding job of finding places for us to stay over the years. Except for "Barnacle Bill's" in Topsail Beach. We shall not speak of that.

But that means I don't have a lot of pressure to do any research. Really, no pressure at all. And to cut down on even that small amount of research that I should do, I figured I'd see if you can help. If there's something that you just know we should do, which I can propose, via ... you, please let me know. ASAP. 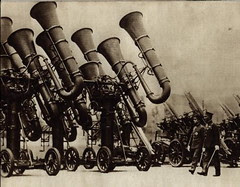 Scala? Io? Factor? CouchDb? You thought those were hot memes? Fuggitaboutit. I got one word fer ya.

Old Joe "Prognosticator" Gregorio is out in front of this one. Some very insightful thought-experiment work there. I can't wait to see how this nascent meme blooms!

Just to add some constructive information to our new tuba overlord meme, thought I'd mention my son's tuba instructor, Tony Granados, aka "Tony Tuba". If you're looking for some tuba instruction in Triangle area, we've been quite happy with Tony, as has my tuba-tooting son. Of course, Tony is profiled on TubaNews.com.

Posted by Patrick Mueller at 12:17 PM No comments: