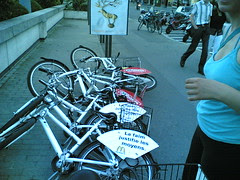 I would be remiss in not pointing out a huge problem I recently found with my twit-growl program that I previously blogged about.

The problem is that the program is a fairly simple python script that uses some 'command line' programs to do all it's heavy lifting; curl and growl-notify. To invoke these, I was using os.system() to invoke the program, building up a big command-line as the parameter. As the programs take parameters which are coming from the data being downloaded, I was trying to be careful to escape the data when constructing the command lines.

Unfortunately, I'm an idiot, and didn't understand the escaping rules. In particular, I wasn't taking into account backquote substitution.

So, I was really suprised one day, when I got a message displayed in growl that was humongous; and the tail end of of the message was a wad of html. Going to the twitter site, to see the message there, I immediately realized what happened. The twitter message included some text like this:

Got that fixed up pretty quickly, by avoiding the use of os.system() and using an os.spawn() variant instead, which (hopefully) avoids the shell completely.

BTW, I continue to use my twit-growl to get 'popups' for incoming tweets, and generally use the wonderful tweetbar Firefox extension for posting, and reviewing tweets en masse.

Posted by Patrick Mueller at 8:56 AM No comments:

James Clark has a great post on XML and JSON. But I have one point to pick at.

First, the number issue. If you assume JSON datatypes map into JavaScript ones, I believe the JavaScript number type does in fact have a very specific representation. I believe, a 64 bit floating point number. Even for integers. I'd love to point to a reference for this, but I don't have one handy, and the one at mozdev is insufficient.

Next, "the set of primitive datatypes is not extensible". But this is true for XML itself. Until you mix in XML schema. It's schema that allows you to interpret a string in XML as some sort of other data type. JSON has no standard schema. Yet. It's easy to imagine though. Defined in JSON, of course.

Posted by Patrick Mueller at 2:34 AM No comments: 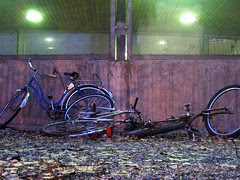 Unless you've been living in a cave for the last week or so, you are familiar with JSON exploit as publicized by Fortify Software. I believe this is the same exploit I first read about on Robert Yates' blog. Original reference was from Joe Walker.

I'm not going to claim to be an expert on this particular exploit, but if I understand the situation correctly, I have a few issues with the current concerns.

Posted by Patrick Mueller at 2:14 AM No comments: