In my "brainwashed" post, I managed to get a diss in for Yahoo!'s BrowserPlus™, calling it a band-aid. However, I carefully, pro-actively covered my arse with an earlier Twitter message "Y! BrowserPlus™ looks interesting; maybe the service framework moreso than the function provided".

The existing services provided by BrowserPlus™ seem like eye-candy. Not sure I really need an IRC client in my web apps, nor text to speech. And I'm worried about the kill switch. Mainly because the implication is that I'm somehow always tethered in an uncacheable way to Yahoo!. shiver

But I do like the service framework stuff. At this point, don't really care how useful it is, glad to see people playing in the space. Why?

The level of functionality we have today, provided by the browsers, for components/modularity of javascript code is <script src="">. Basically, all the power, flexibility, and functionality of the C preprocessor's #include statement (good and bad). But I'm looking at my calendar to see what year this is again. Doh!

The big JavaScript frameworks build their component stories on top of this, and the whole thing just gives me the willies looking at it. While I often wonder if JavaScript actually needs real structuring capabilities in the language, like a class statement, et al., I'm happy to try living without it, and try playing with some other mechanisms.

Java likewise has a crap component/modularity capabilities out of the box. Jar files and class loaders. OSGi plugs that hole. JavaScript likewise needs it's hole filled (that link is sfw, I swear).

Could we do this with Google Gears WorkerPools?

In my "fun with WorkerPools" blog post from a while back, I wondered about building a service framework on top of the WorkerPool bits from Google Gears. Seems like building something similar to what BrowserPlus™ provides is pretty do-able.

The great thing about the WorkerPool stuff is that it brings another dimension to the JavaScript story - separate environments / contexts / spaces. The ability to have a bunch of code running, separated into protected object spaces, with very explicit communication channels open between these spaces. The best you can do with <script src=""> is namespacing via fixed name objects. Ugly and unsafe. I assume BrowserPlus™ is doing the multi-context thing as well, but I haven't looked close enough.

The other neat thing about Google Gears is that something like it has leaked into the WHATWG work, via a draft recommendation called Web Workers. Meaning we may be able to do this in a browser-independent way sometime around 2022. Or, our Chrome Overlords will render it moot, since Chrome already ships Google Gears. Or all the browsers will start shipping Gears. Whatever. Workers FTW!

Posted by Patrick Mueller at 11:20 AM No comments:

hiking in the triangle 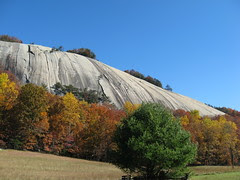 I've been doing a fair amount of hiking around the area lately, for some reason. Since it seems like there are a lot of folk unfamiliar with the fantastic parks available in the triangle area, and North Carolina in general, thought I'd dump some information here.

For the hikes listed below, you won't need any special equipment to take a hike. Outdoors-y clothes, something you'll be comfortable walking in for a couple of miles (you're hiking!). And sweating in. Some kind of tennis shoes /sneakers. Bug spray if it's a buggy season. Sunscreen. A hat? And a bottle of water. You'll be outside, walking around for an hour or two; use your head.

Listed here a couple of parks that aren't really local to the triangle, but close enough to make a day trip. I'm totally geared up when I go to one of these; boots, pack with bunch of crap in it, staff, GPS, etc. Though I've done some of the shorter hikes with the kids with just a bottle of water.

The paths marked on the trails as "strenuous" generally mean - lots of climbing - which usually also means great views. There will be lots of sweat.

Do some research before you go.

I remember reading Michael Lewis's "Liar's Poker" back in the day, and enjoying it, so it's not a big surprise that I also enjoyed reading his recent article on our financial crisis, "The End".

But my reaction to the article is a little different than Tim Bray's "Angry" blog post. Anger is an understandable reaction; we've essentially been fleeced. But when you get fleeced, you have to realize that often you walked right into the scam. One of the people to be angry at, is yourself.

How did this happen?

One word: brainwashing. We all wanted to believe there really was a lot of money to be made, that level of wealth building going on was somehow sustainable, and that we could all be a part of it.

But honestly, did you really believe your realtor when they told you the property prices in the neighborhood you bought into were appreciating 10% a year, with no end in sight? Does it really seem ok to spend $30,000 on an automobile? Can you really look at the historical record of the Dow Jones Industrial Average from the 1930's to today, and say: "I don't see anything abnormal".

We all wanted to believe, so ignored the signs, if we saw them at all. Were there some bad apples out there? Sure. But far more folks who weren't really bad apples, really just duped like we were. Deluded by fantasies of riches. Brainwashed.

Relating this to computer tech

I couldn't help but to extrapolate from my take on Lewis's article, to some of the goings on in the computer tech field today, because I think there's a fair amount of brainwashing going on in tech also. What do you think about the following ideas:

To me, these sound crazy. Why would you use a word processing system as the basis for a data serialization format? Nuts, right? But we are. XML traces it's roots back to IBM's Generalized Markup Language, a text markup language not like LaTeX or nroff (good times, good times). XML is frankly not all that different from GML, I'd say easier on the eyes (brackets are easier to visually parse than colons), and more regularized syntax. But it's fundamentally a language to apply bits of text formatting to large amounts of raw text. A typical BookMaster document was mainly plain old text, with occasional tags to mark paragraph boundaries, etc.

How did these modern-day accidents occur? Hype. Being in the right place at the right time. They more or less worked for simple cases. We all wanted to believe. We brainwashed ourselves.

Luckily, evolution is taking it's toll on these two languages. XML isn't the only game in town now for structured data; JSON and YAML are often used where it makes sense; Roy Fielding notes that perhaps GIF images are an interesting way to represent sparse bit arrays (ok, that's a random mutation in evolutionary terms). We're seeing an upswing in alternative languages where Java used to be king: Ruby, Python, Groovy, etc (with many of these languages having implementations in Java - perfect!).

Reality is setting in; do what makes sense; think different; the hype curve doesn't always point to the right answer.

So while I can't complain so much about XML and Java as I used to, it's kicking a dead horse at this point, I do have a new whipping boy in the tech world for where we've been brainwashed - "web applications". Those things that run in our web browser, giving us the power, beauty and flexibility of desktop apps. Web 2.0. RIAs. GMail and Google Maps.

I don't have to explain to anyone who's ever tried putting together a "Web 2.0 application" the utter pain in doing this. Ignoring server-side issues, you have to deal with three different languages: HTML, CSS, and JavaScript; typically interspersed betwixt themselves. That behave differently in the three to five popular browsers you might hope to support. And the iPhone. Server side programming throws more wrenches in the gears, as in our simpler web 1.0 world, we frequently mixed HTML, CSS, and JavaScript with whatever programming language(s) we used on the server. And we still do, at times, in this new world also, only there's lots more HTML, CSS and JavaScript, so it's even messier.

Or maybe you're using Flex or Silverlight or some other more constrained environment for your web app. But then you have different problems; your users might expect to be able to bookmark in the middle of the app - it's running on the web after all. Or cut and paste some of the content. Etc. And you're probably still deploying in a web browser anyway! There is no escape!

What really frustrates me about the situation we're in, is that we've painted ourselves into a corner. We started with a very useful, mainly read-only, networked hypertext viewer, and over the years bolted new geegaws on the sides. Blink tags. Tables. JavaScript. Frames. DHTML. File uploads. XmlHTTPRequest. SVG. HTML Canvas. (stop me, my head's about to explode!) All great stuff to add to a mainly read-only, networked hypertext viewer. Can you use it to build a word processor? Yes, you can. Well, a team of software developers at Google can. Not sure that I can.

But I used to be able to build GUI apps without a lot of difficulty. High function, richly formatting text editors even. In C, for gawd's sake, though life got a lot easier in Smalltalk.

Wake up! We fundamentally have the wrong tools to do the job. We're using a spoon where we should be using a backhoe. Look down! You're using a spoon for *bleep*'s sake! Don't you realize it? Slap yourself around a little and clear the fog from your eyes. Expect better.

To be a little more concrete, I actually do think that the fundamentals of our web tech economy are sound. I'm not unhappy with HTTP, HTML, CSS, and JavaScript when viewed as separate technologies. I don't think we've fit them together in the best way, to make it easy to build applications with. And they're wrapped in a shell optimized around mainly read-only, history-enabled, page-by-page navigation, which doesn't seem like the best base on which to build an application. It's time for some new thinking here. Can we take some of the basic building blocks we already have and build a better application runtime platform than what we've got in front of us? I have to believe the answer is: Yes we can.