Must. Hookup. To. Guitar. (via Ableton Live via TonePort)

I can already imagine the hours of practice I will be avoiding.

Isn't it great when folks use standard componentry?

Photo 'I wanna be a guitar hero', with a nice CC license, by ckirkman. Found using the Create Commons Search Site.

Technorati Profile
Posted by Patrick Mueller at 4:32 PM No comments:

Thought I'd take the opportunity to teach the boys the concept of hexadecimal.

Posted by Patrick Mueller at 8:32 PM No comments:

Dave Shields posted a blog entry the other day, "Yogi Yarns - On being lucky. First is not always best", in which he talks about his involvement in IBM's first official open source project, Jikes. Dave's current posts are a great read on open source in general. Highly recommended. 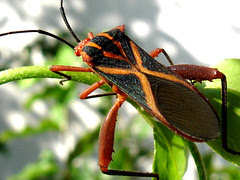 I couldn't resist sending him a note though, about a small piece of source code that I managed to convince my IP Lawyer at the time, Mr. X, to 'give away'. This was 1994, and giving away source code wasn't something that normally happened in IBM at the time. Dave reposted my note in his blog.

Of course, the real credit goes to Mr. X. I swore I was going to give Mr. X a heart attack at some point, with all the "crazy talk" that I threw at him. For some reason, he actually listened to me during my tirades, and realized that this particular rant, of wanting to give some customers some relatively harmless / worthless code, was not a completely stupid idea, and ran with it. The resulting license that he had me add to the distribution bares a striking similarity to open source licenses you see today. Remember, this was 1994.

Of course, the real reason I responded was that it's impossible to resist someone saying a record can never be broken. The question is, who's going to break Mr X's record?

I'm also reminded of an opposite case. Way back when, this guy I'd never heard of, Ward Cunningham, had a program on his web site called WikiWikiWeb. I was facinated. So much so that I wrote a lame clone of it in REXX for OS/2. And then told Ward about it. This was about the same time, 1993 or 1994.

Ward emailed me a few months ago, asking me if I still had the source. I never distributed the source, because, that was something that simply wasn't done. I had written some of it at work; it was IBM property, I couldn't just give it away.

I had a fun night, that night I got the email, trolling through lots of my old source code. I have stuff going back to the early 90's. But I couldn't find my wiki clone. Sad. If I HAD given the code out, there'd be a much better chance of it still be available, somewhere.

Posted by Patrick Mueller at 11:31 AM No comments: