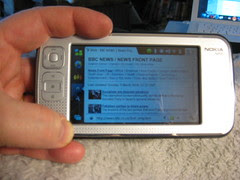 I recently succumbed to my gadget lust and purchased a Nokia N800, which bills itself as a "Internet Tablet". I'd classify it as a PDA.

So first, why choose this thing over some of the more likely gadget candidates? I've had people ask me about the following devices:

So, here are some of the things I like about this device:

It's not perfect though:

All in all, pretty much what I expected. Some good, some bad. If you've not used a PDA before, you will most likely be unhappy with things like the browsing experience. For the casual user, there's actually lots of stuff here that I won't use much, but I'm sure other people would: Skype and Gizmo, IM, Email client, RSS client. And of course, Doom.