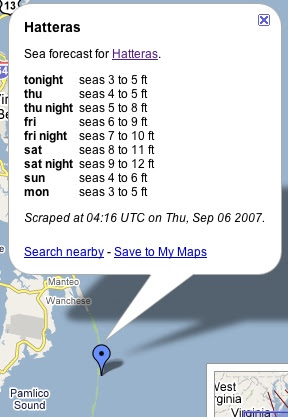 Well, it's September, which means it's time to start planning my "take a day off work and head to the beach to spend some quality time on the boogey board" day.

Plan is the operative word; it's easy to find out when the weather is going to be good; it's a lot harder to find out when the waves are going to be good. I finally spent some time trolling through the massive amount of data at NOAA, and finally found something close enough; forecasts of sea wave heights going out a couple of days. Not the same as the height of the waves at the beach, but close enough.

Wrote a little Ruby to generate a KML file after parsing the interesting data out of the reports, and the result is a little Google Maps / Earth mapplication, North Carolina Seas.

Source here. Note the program is set up to regenerate the KML file via a cron job every few hours, rather than as a 'web app'.

But then, after all that, maybe I'll go for a hike in the mountains at a state park instead of a day at the beach. Life is rough.

Posted by Patrick Mueller at 1:16 AM No comments: