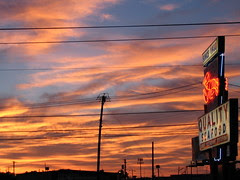 A couple of meta-programming links for you, from Ward and Kent, and a slightly related topic I recently ran into.

From Ward, a blog post titled 'Is "Agile" Too Easy?'. While Ward ends up talking about agile, what I found more interesting was the general concept of "the essence".

From Kent, a movie of a talk he gave titled "Ease at Work". I'm 100% certain I've never sat down and watched one hour straight of YouTube, till I watched this. When starting the last segment, I realized I should have watched it via the wii instead. Next time.

Both Ward and Kent are discussing some of the intrinsic qualities and mind-states of programmers. Interesting stuff. The kind of stuff we all know, but never really think about too much.

I ran into another one of these intrinsic qualities the other night when I attended the panel "Breaking Into the Game Industry" presented by the Triangle chapter of the IGDA. The triangle, as it turns out, is home to a large number of game companies. Three triangle-based game company execs were answering questions on how to get a job in the game industry. One meme that kept coming up, was that the companies were looking for people with "passion". They don't just want good technical people, they want good technical people who will love their job. Like the "essence", passion is something "we know when we see it", Gladwell-ian Blink style. Gaming companies have the luxury of making this an absolute requirement due to the large number of applicants they get to select from, compared to the rest of the software industry.

Regarding "essence" and "passion", these are obviously qualities we desire to have in our own jobs. But they also seemed like the distillation of the qualities we look for in potential new hires, in co-ops who may become new hires eventually, and future team-mates, whether you're adding to your team, or shopping for a new team to work with. Good, simple memes to keep in mind.

Kent's talk provides what I would consider some suggestions on maintaining the passion, or more pessimistically, dealing with passion-killing work habits, for those times when you don't happen to be on the 'genius' side of the roller coaster.

Posted by Patrick Mueller at 4:35 PM No comments: 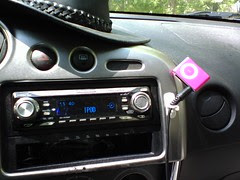 shuffle in the car
© Patrick Mueller

As a little enticement / reward for doing more exercise recently, I decided to upgrade my iPod. My kids wanted me to get one of the big boys; they wanted to see the videos and the games. Not like they would have ever had a chance to play with it or anything. :-) I opted instead for the shuffle because I really wanted something smaller.

What I'm having a bit of a problem getting around is the lack of podcast support in iTunes with the shuffle device. Namely, that it's missing the "Podcast" tab for the device in iTunes, where you'd select the podcasts you wanted auto-synced. This is important to me, because my primary use of my iPod is to listen to podcasts.

Instead, you have to do things manually. You know, drag and drop files in the iTunes UI. And select files to be deleted. Etc. That's certainly a step down in functionality than I had with my crusty old 3G iPod. I have no idea why the functionality is missing in the first place.

I currently do have an "Autofill" set up for a Smart Playlist I created called "Podcasts" that contains, well, you can guess. Autofill is some special function, presumably just for the shuffle, that picks songs randomly from your library or from a playlist to put on the shuffle. I can't quite tell how well this is working yet; I'm sure I'll have to go a few weeks to see if it makes life easier. At a minimum, having a Smart Playlist with just podcasts in it makes life somewhat easy itself, in terms of copy en masse to the device.

One advantage of the simplicity factor here is that it's quite easy to arrange audio files, on the device, in whatever order you wish. Instead of turning and clicking to pick the things I listen to (while driving), I can now arrange them in the order I want, sitting on the computer.

The size, simplicity, and wacky colors of the device are hard to beat. I especially love the big play/pause button right in the middle, and the integrated clip.

Posted by Patrick Mueller at 2:14 PM No comments: