Yes, we camped out. At our local Target, which we believed was going to have 60 wii's available, and they did. My wife got the 5pm - 10pm slot, I got overnight. Kids stayed the entire time. It was frosty cold; literally. One of the shots in the flickr set shows the frost on one of our sleeping bags. The hot apple cider, hot Bojangles biscuits and hot Krispy Kreme doughnuts helped a little, but not enough. I should point out this was the kids' idea. I was quite happy to wait till they became available on Amazon, and order from there. But they've been working us for the last few weeks about camping out, and when it finally came down to it, we folded pretty easily. The plan had been to head over at about 4am. Plans changed when we drove by at 4pm and saw about 9 people in line. By about midnight, there were 47 people in line. I think we could have arrived at 4am and just made it.

The crowd was great. Mostly young-ish nerdy types. The only shots I heard came from the Gears of War session someone had going. Power supplied by Lowes, next door, via an extremely long extension cord. Target really did this right. Came out at about 7pm to tell people they'd be opening the doors at 8am, and handing out vouchers at about 7am. That's the boys, to the right, holding our #16 voucher. Target let folks in early to use the restroom, also. Everyone was very friendly.

The Wii setup was easy, I guess. My 13 year old did it. I got it added to the network; it was no more difficult than adding any new device to our network was. Which for me, is a number of steps (security, dhcp, etc). For most people, I'm sure it will just 'work'.

The boys played Wii Sports all day; that's not my type of game, but they enjoyed it. Note you will need to have more 'open space' in your gaming area than normal, to allow for folks making full swinging motions with bats and rackets, as well as making plenty of boxing motions.

The boys didn't have enough money to get any games, so I bought one, and gave them the choice of Super Monkey Ball, Need for Speed, or Excite Truck, which seemed like the only ones I'd really play. They chose Excite Truck. Finally got to play last night at about 10pm.

The wii controller is quite cool. Bluetooth. Wonder if my Mac can see it, and what it would do with it? For the driving game, you basically hold the controller horizontally, then tilt it to steer and some other actions. I felt like I had to hold the controller a little unnaturally to do this, but once I got in the groove (a few minutes), it was pretty comfortable and easy.

BTW, as an additional non-proprietary thing they've done, you can use an SD memory card with the system, somehow; looks like it will show pictures from a phone or camera right now.

The internet connection doesn't seem to do much right now. One section of the system seemed to indicate that we'll be able to browse the internet soon. Showing an image of a Google web page. I guess if you're trying to show people you can connect to the web, showing them Google gets the idea across right away. Though it makes me wonder if there isn't some Google linkage coming. I'll be interested to see if they have some way to 'extend' web pages to do something interesting on them, when browsing on the wii. Also interested to see if people end up finding some networkable things on the wii. I was able to ping mine, but it doesn't have port 80 open.

Looking forward to downloading VectorMan from the Genesis section of the downloadable classic games area. Hope it's just $5, like a lot of them are.

Posted by Patrick Mueller at 8:41 AM No comments: 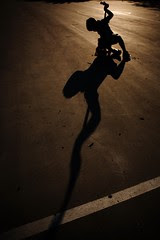 I should point out that the topics presented here are research topics undertaken by IBM. Both presentations are the result of IBMers taking research and development experience in programming languages and applying that to PHP. And specifically, the challenges that PHP presents.

Graeme's presented on looking at the PHP runtime through the eyes of someone who has been developing Java VMs for the last decade.

Interesting stuff for folks interested in the nuts and bolts of dynamic languages and runtimes, and of course, specifically, PHP.

BTW, this was the same conference that Tim Bray presented on web frameworks, and then blogged about in Comparing Frameworks.

Posted by Patrick Mueller at 8:19 AM No comments: