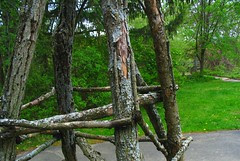 I just listened to the Jon Udell podcast interview with John Lam, which was quite interesting. Highly recommended. I do, of course, have a bone to pick.

At 9:52, the conversation turns to talk about JavaScript. John Lam says JavaScript is "a very difficult language for programming in the medium or the large and by medium and large I'm going to say applications which exceed 5,000 to 10,000 lines of code. Once my JavaScript gets up to that, I have a really hard time maintaining that stuff because modularity is definitely one of the things that isn't really all that well thought out in the JavaScript language. Which is much better in languages like Ruby and Python."

Now, John is certainly correct that JavaScript lacks language level modularity features like namespaces, packages, and class definitions. Typically, a 'class' is defined by creating a constructor function and adding methods to it by adding functions to the constructor's prototype. Packages and namespaces are defined as a top-level objects with the top-level package segment, with a field defined for the next package segment, and then recursing through the remainder of the package segments.

Some JavaScript libraries like YUI and dojo actually do have some code and conventions around defining such things.

So, note that. No language level modularity features like a 'package' and 'class' keyword. It's all dynamic. And perhaps some conventions provided by libraries you happen to be using.

Which is quite similiar to Smalltalk. There are no 'language level' features for defining classes. There is no 'class' keyword. Instead, to define a new class, I'd go into a class browser, and fill in a template like:

This is a class definition. However, literally, it's a message send. A message sent to a class (Number) to create a subclass (Fraction) with two instance variables (numerator and denominator).

I don't recall anyone who ever bothered to learn Smalltalk having made claims that it wasn't modular. So I don't think having language level modularity features is a neccessity for making the language usage modular.

My reference to Smalltalk isn't entirely spurious given the recent news of Dan Ingall's Project Flair. As Tom Waits would 'sing' ... "What's he building in there?".

This leads me to a number of questions:

Posted by Patrick Mueller at 9:51 AM No comments: